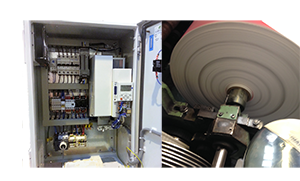 David Emmett, the owner of British Paper Coils Ltd in Leyland, Lancashire, approached APS with  a problem that was causing major issues for his company.

A printing machine consisted of a main motor and an air brake on the unwind reel.

The rewinder was being controlled by a magnetic clutch. This was receiving a 0-10 Volt signal from a tension controller which was measuring the tension in the web with a load cell. The rewind shaft was coupled to the main drive via a convoluted series of cogs and chains.

The main problem was the shock of the clutch coming in and out. This resulted in a chain snapping approximately once every 3 months and the clutch burning out approximately once a year. Apart from the £3k cost of component replacement and downtime the operator could not run the machine above 50 m a minute as this would cause a much greater frequency of failure.

Automation Products and Systems proposed solution was to remove the chain and magnetic clutch and replace it with a geared motor which would be controlled by a Lenze 8400 Highline drive.

Due to the age of the machine there were no electrical drawings. We were able to identify the connections we needed on the original panel and interact with the new system. These were the tension demand output and the safety circuit.

So for a given line speed the rewind reel needs to slow down as the diameter increases. Also as the mass increases the torque output of the motor must increase to maintain the tension in the web.

APS’s solution was to configure the drive to run in torque mode. Following the 0-10V input from the tension controller.

The drive was set up with the following functionality:

It is very important to size the drive and motor correctly otherwise at low tension demands a small change in tension is impossible to control. The drive was sized using Lenze’s Drive sizing software.

After ample testing the machine was running at 100m/ min which is twice the previous throughput. An unexpected added bonus was that the machine ran a lot quieter.

‘Derek completed the commissioning of the system to our great satisfaction. Both Derek and Andy worked extremely well around our needs. We are very pleased with the work done and commend them highly. Job well done – thanks’

The names mentioned are employees of Automation Products and Systems Ltd.