APS (Automation Products and Systems) provided a system to local company who wanted to develop a machine for their own use. Although they knew their market well and saw the advantage of providing low cost environmentally friendly products their engineering resources were limited and so they looked to Automation Products and Systems ltd to help provide the expertise they required to make the project successful.

The line was split into two parts. The briquette line and the ‘pelletising’ line.

A briquette is made from compressed sawdust. The advantage of using these types of logs is that they burn for much longer than natural wood logs.

There are other sub processes along the way such as an electromagnet to remove any unwanted metal such as nails and a heater to dry the wood if required.

The control philosophy is as follows 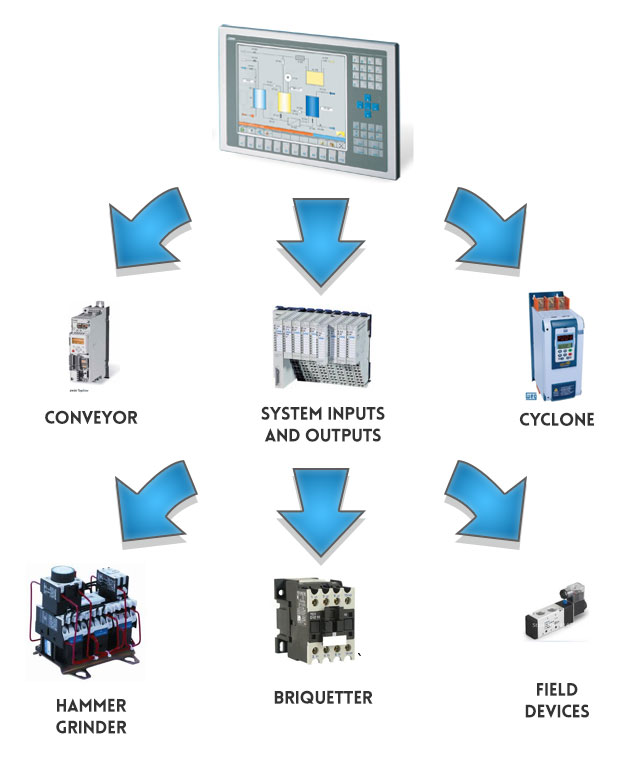 The Screen and User Interface:

The communication network used in this system is CAN. This allows greater flexibility in the control of the system. For example with the drives it can not only issue commands such as Run, Jog and direction it can also control the speed of the relevant motor and diagnose any problems with the axes such as an over current trip, under voltage trip e.t.c.

The PLC starts the line in a given order:

1st the grinder followed by the other axes once this is up to speed.

The conveyor which feeds into the hammer grinder is controlled by a Lenze 8400 Stateline drive. The operator inputs a speed reference as a base value into the screen and the PLC monitors the current of the grinder motor via a current transformer which is monitoring the main cable in the star delta arrangement on the grinder. This will feed back 4 -20mA into the drive where 20mA corresponds to 250A. This current is read over the CAN network and the conveyor speed is moderated so that the grinder doesn’t get too full. In other words the greater the current the slower the conveyor speed which will mean that the grinder is filled at a slower rate which will mean that the load decreases. When the load goes below a set value the speed of the conveyor goes back to its normal base speed. This measured current is shown on the screen in Amps or a percentage value as selected by the user.

The grinder has the most powerful AC motor and is rated at 110Kw. This is a fixed speed application but due to its starting current a star / delta starter was fitted to this axis. This starts the motor in a star winding configuration. In simple terms this means that the voltage is split over two windings in the motor thus reducing the torque and, therefore, the current available. This causes the motor to ramp up to full speed. This ramp is dependent upon the load and by monitoring the current a suitable time was inputted into the PLC to switch over from Star to delta. This places all the available mains voltage over the single winding and the motor is able to operate at rated power. This grinds the wood into a fine sawdust ready for the next process.

This unit compresses the material and squeezes it out under pressure through a pipe of the desired diameter.

The briquettes are now ready for use.

A Controller Area Network (CAN bus) is a vehicle bus standard designed to allow microcontrollers and devices to communicate with each other in applications without a host computer. It is a message-based protocol, designed originally for multiplex electrical wiring within automobiles, but is also used in many other contexts.

CODESYS (an acronym for controller development system, previously stylised CoDeSys) is a development environment for programming controller applications according to the international industrial standard IEC 61131-3.